The Director General of the Small and Medium Enterprises Development Agency of Nigeria, SMEDAN Olawale Fasanya   has reiterated the need to unlock the potentials of the MSMEs  sub-sector for the purpose of rapid integration, growth and development of D-8 countries. In his welcome address at the opening of the D8 Forum on SME and Health Markets in Abuja. Mr Fasanya said MSMEs play major roles in the national economies of the D-8 and that formal SMEs contribute up to significant percentage of total employment and up to 40% of Gross Domestic Product (GDP) in the D-8 economies. These numbers  he said would be significantly higher and enhanced when informal SMEs are included.

He said World Bank studies revealed that 600 million jobs will be needed in the next 15 years to absorb the growing global workforce mainly in Asia and Sub-Saharan Africa. And that In emerging markets, 4 out of 5 new positions were created by MSMEs, which is about 90% of total employment in the formal sector.

The SMEDAN boss noted that evidence has shown that MSMEs will take a leading role in meeting most economic related goals of the SDGs. These include promotion of inclusive and sustainable economic growth, increasing employment opportunities and decent work especially for the poor, in addition to promoting sustainable industrialization and innovation and creating a positive push for higher quality of life, better education and good health for all.

According to him, a large proportion of MSMEs in most developing/emerging countries often have little or no financial resources and face tremendous barriers in accessing conventional financial institutions for start-up businesses due to their poverty and lack of collateral assets. 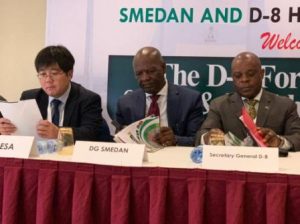 He said this financial challenge is particularly affecting entrepreneurs among rural women and other socially disadvantaged groups. The development of SMEs is therefore crucial to the “Leaving No One Behind” Principle, central to the 2030 Agenda.

The Director General was of the view that the D-8 member States should jointly address the issues raised with a view to taking advantage of the global markets and realignments, adding there are several windows that can be opened to enable member states share experiences towards creating enabling environments for MSMEs to operate.

Specifically, he said “we can arrange exchange program for some key officers in SME developing Agencies of the D-8 countries to self-develop (as a form of Training of Trainers) in the areas of the use of technology, improving product export, development of agric-value chain and access to finance”

“I also believe that special trade fairs/expos can be arranged for member States to create markets and cross-border trades for MSMEs that are export-ready”. He said.

These initiatives listed he said are some of the reasons for the proposal for the establishment of the D-8 Centre on SMEs that would promote, encourage, advance and support the activities of MSMEs at the national level as well as within the D-8 region to further strengthen economic, trade, commercial integration and linkages.

The SMEDAN helmsman further said the establishment of the D-8 Centre on SMEs will unleash substantial development impacts, synergies between and among the D-8 members States and relevant national agencies/authorities. The Centre will also provide tremendous opportunities for SMEs to connect and jointly explore platforms on transforming scientific innovations at the national level into development solutions for the D-8 family.

Furthermore, he said the proposed centre, in conjunction with D-8 Secretariat and other D-8 national authorities responsible for development and regulation of SMEs will identify best practices and develop recommendations to eliminate bottlenecks and maximize the potential of SMEs among D-8 Member States. 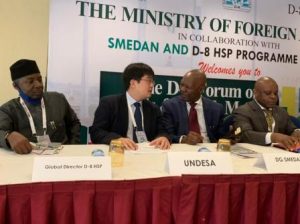 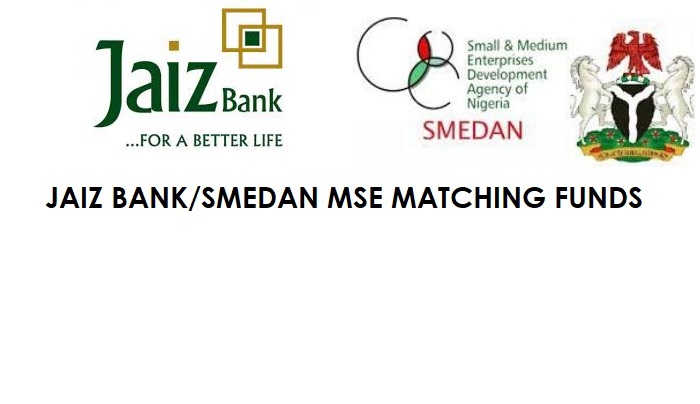