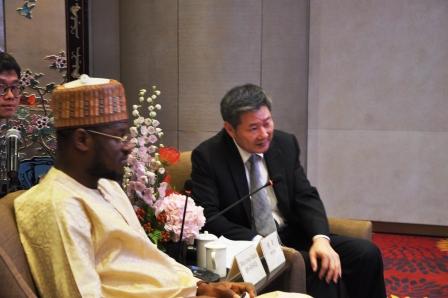 China International Small and Medium Enterprises Trade Fair (CISMEF) which was launched in 2004 is an event with the highest level, largest scale and most wide-ranging influence in the Asia-Pacific region. CISMEF has enjoyed the support and participation of many countries especially ASEM members, Central and Eastern European and sub-Sahara Africa.

The 2019 edition of CISMEF as usual took place in Guangzhou, the business hub of Guangdong Province of China. Poly World Trade Centre Pazhou was the venue for this year’s edition which lasted between 22nd and 27th of June.

Responding the Director General of SMEDAN, Dr. Dikko Umaru Radda thanked the Government of the Guangdong Province for the hospitality extended to the Nigerian delegation.

At the opening reception which was held at Grand ballroom of Grand Hotel in Guangzhou, The Nigerian delegations was led by the Director General and Chief Executive Officer of SMEDAN, Dr. Dikko Umaru Radda who was on the high table among other heads of delegates which includes Mr. LI Yong the Director General of the United Nations Industrial Development Organization, UNIDO.

The fair was officially declared open by Mr. Ma Xingrui the governor of the Guangdong province, after the opening speech and cutting of the tape, the Governor of the Peoples Government of Guangdong Province Mr. Ma Xingrui, accompanied by the DG SMEDAN and other officials of CISMEF as well as Heads of delegations from other countries visited and moved round the fair ground.

Later in the afternoon at the Grand Ballroom of Garden Hotel in Guangzhou where the 2019 SME summit took place, the Chairman Governing Board of SMEDAN, Otunba Femi Pedro and DG  of SMEDAN, Dr. Dikko Umaru Radda were present with other Nigerian Delegates. Issues bordering on the development of SMEs particularly on innovations and sustainable growth were the focus of the summit.

At the dinner banquet  for overseas delegates organized by CISMEF 2019 committee, The Director General and Chief Executive Officer of SMEDAN who was the special guest of honor at the event,  Dr. Dikko Umaru Radda in his remarks highlighted major challenges faced by Small and medium enterprises as, modern technology, infrastructure inadequacies, funding and capacity know-how among others.

Dr. Radda pointed out that to make the large population of MSMEs in Nigeria more competitive and to overcome the challenges, the country cannot afford not to associate with China.

He said Nigeria bilateral relationship with China started in the 70s, adding between then and now the trade volume has reached over 100 billion dollars. “To concretize the relationship we believe the issue of technology transfer should be taken more seriously”.

The Director General stressed that SMEDAN was not unmindful of what past participating MSMEs have benefitted by way of accessing modern equipment, better product packaging, signing up investment partners and enhanced trade exchange, adding we are looking forward to positive post fair deliverables that could enhance the competitiveness of Nigeria’s MSMEs.

To round up the global event, the management of SMEDAN organized a dinner for the Nigerian exhibitors and commended them for a brilliant outing going by the collaborations and business transactions struck by the Nigerian team.

The Chairman of Governing Board of SMEDAN, Otunba Femi Pedro noted that Nigerians should emulate the Chinese who some years back were not a force to be reckoned with. He said the participation of Nigeria in the fair would further boost their competitiveness in the global market.