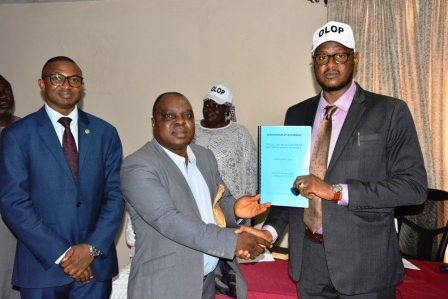 The Small and Medium Enterprises Development Agency of Nigeria (SMEDAN)   has signed a Memorandum of Agreement, MoA with some Microfinance banks and cooperative societies from the North Central geo political zones towards the successful implementation of its  One Local Government One Product OLOP programme for the year 2018.

The ceremony which took place in Abuja was attended by heads of the micro finance banks and chairmen of the cooperative societies, the event   witnessed   the signing of the instruments that would lead to the disbursement of about N500 million to beneficiaries of the One-Local Government-One Product (OLOP) project involving Small and Medium Enterprises (SMEs) in 109 Local Government Areas (LGAs) across the country.

In his remarks at the signing ceremony the Director General and chief executive of SMEDAN, Dr. Dikko Umaru-Radda congratulated the beneficiaries of the scheme and urged them to justify the confidence reposed in them. He said the initiative seeks to empower SMEs to harness the full potential of any product which they have competitive and comparative advantages over others in any particular LGA.

He said beneficiaries who came under cooperative societies were able to access between N2.5 million to N5 million for both the machinery and working capital needed to achieve their business objectives.

The SMEDAN boss said the monies were being given with a moratorium of six months before the businesses begin to make repayment. He also explained that government had further provided a 30 per cent incentive to all beneficiaries, adding that they are only to pay back 70 per cent of the money accessed within a period of 18 months.

The OLOP project is currently being implemented by SMEDAN in collaboration with microfinance banks. Radda said: “What the programme intends to do is to provide a common machinery for the cooperatives, to provide a work space, to train them with the entrepreneurship knowledge as well as giving them a working capital to run their businesses.”

According to him: “OLOP is an initiative that we borrowed from Japan. They had been doing it in Japan but they call it One-Village-One Product.“But in Nigeria, because it is a very large country with very high population, then we resorted to choosing OLOP.

“What we clearly mean by that is we will go to a local government, check for a product which has competitive and comparative advantage and we select it.”  He said the non-availability of funds had compelled the agency to select one local government each year from each of the senatorial districts in the country.

He said the initial target was to be able to reach all the local governments in the federation before 2020 but admitted it was no longer feasible considering current funding challenges. “But I think in the year 2022, we would be able to meet up with the 774 local governments target which the agency targeted,” he said.

Responding the, Managing Director/Chief Executive, Microvis Microfinance Bank, Mr. Kayode  Akinade,  thanked the management of SMEDAN for choosing them to  actualize the objectives of the project, he assured that they will do their best to make the programme a success story. Mr Akinade also said that the focus was on how government could grow the SMEs base given that the sector accounted for over 50 per cent contribution to GDP.

He added: “This project is so important, in such a way that it has a clear objective to deepen products that are specific to local governments in the country in different senatorial districts in the country.

“We want to see how we can develop some products that are peculiar and unique to that senatorial district.

“Microfinance banks are trained to assess cooperatives and assign them the right finance that is required by them to deepen their business.”