The 2021 National Survey on Micro Small and Medium Enterprises MSMEs by the Small and Medium Enterprises Development Agency of Nigeria, SMEDAN in collaboration with the National Bureau of Statistics (NBS) will commence on Monday 16th August 2021 throughout the country.At a joint press conference by chief executives of both SMEDAN and NBS to herald the commencement of the survey held in Abuja, the Director General of SMEDAN, Dr. Dikko Umaru  Radda stressed the importance of the Micro Small and Medium Enterprises MSMEs sub sector to the sustainable growth of the national economy. He said the last National Survey of the MSMEs indicated that the sub sector contributed 49.78% of the national Gross Domestic Product while it also accounted for over 76% of total employment and contributing 7.64% to total export.

As important as this sub sector is, it is still faced with several challenges that have impeded their start, growth and sustainability adding one of the key challenges that have limited the development and growth in the sub sector is the the absence of up to date and useable data of MSMEs. Unfortunately he lamented that the inclusive, effective and sustainable development of the micro small and medium enterprises sub sector is largely dependent on the availability of useable data. Dr. Radda noted that the need to have an updated survey of the MSME subsector is further justified by the reviewed National Policy on MSMEs  and recent socio economic development and global occurrences  such as Covid 19 pandemic , the cycles of economic recessions and unending terrorist , kidnapping and banditry activities.

The Director General explained that the agency was fully aware of the need to have an operational framework to guide the development of the MSME subsector hence the identification of key stakeholders to review the National Policy on MSMEs which he said has gotten the approval of the federal Executive Council FEC. He said another key document that was critical for the realization of the Agency’s mandate is the National Survey on MSMEs, adding that the National Bureau of Statistics (NBS) is the apex statistical agency in Nigeria authorized by the Statistics Act of 2007 to produce socio economic statistics on all facets of development in the country which the survey falls within.

He said SMEDAN in partnership with NBS has successfully conducted and produced rounds of reliable MSME survey data reports since the establishment of the agency in 2003. Dr. Radda also said there are several stakeholders that rely on the data generated by SMEDAN through NBS to address issues such as the current data of MSMEs in Nigeria, availability of credible data for local and international references, contribution of MSMEs to the national GDP, gender composition of MSME population, the number of Nano, Micro Small and Medium enterprises in line with the revised National Policy on MSMEs.

Other justification  for the survey according to him; include the need to determine the number of micro small and medium  enterprises MSMEs in Nigeria on the basis of national,  geo political zones and states, identify some key challenges of MSMEs,  number of employments  by the sub sector  and the possible impacts of the Covid 19 pandemic on businesses. The Statistician General and Chief Executive Officer of the National Bureau of Statistics, (NBS) Mr. Yemi Kale said his the Bureau in collaboration with SMEDAN have successfully carried out three rounds of survey on MSMEs in 2010,2013 and 2017  respectively and was on the verge of commencing the conduct of the fourth  round which will cover 2019 and 2020 economic activities of selected MSMEs across the 36 states of the federation and the federal capital territory.

He disclosed that this year they would introduce the concept of Nano enterprises which hitherto was considered as micro enterprises, adding that  the new sub division refers to  those 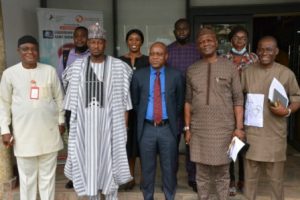 enterprises that have only one or two persons  engaged in the operation while the micro enterprises are  now those enterprises  with three to nine persons engaged in its operations. Mr. Kale who was represented by Mr. Adeyemi Adeniran, Director, of Real Sector and Household Statistics department also revealed that the survey will henceforth be called NMSMEs survey, and that a new module has been introduced into the survey questionnaire to assess the impact of Covid 19 on business operations and also seeks to identify how the enterprises coped during the pandemic period and what areas of support and intervention they would require from government at this post Covid period.

He also disclosed that the survey activities will start on Monday 16th of August 2021 with the Training of Trainers ToT workshop in Abuja while the training of field staff and actual field work will commence from 21 of August 2021.