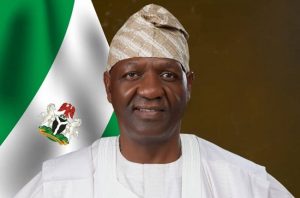 SMEDAN GETS NEW DIRECTOR-GENERAL
Mr Olawale Tunde Fasanya was born on 3rd June 1962 in Ogbomosho, Osun state, South West Nigeria.
He is a holder of the West African School Certificate, Bachelor of Arts (English and Literary Studies) from the prestigious University of Ife now Obafemi Awolowo University Ife in 1985, Advanced Certificate in Public Relations, Nigeria Institute of Journalism (NIJ) Ogba Lagos 1990, Masters in Public Administration, Lagos State University Lagos 1994, Diploma In Market Oriented Small Business Development Service, International Training Centre of International Labour Organisation (ILO) Turin, Italy in 2008, and presently expecting his PhD in Public Policy Analysis and Management University of America. Mr Fasanya did his mandatory National Youth Service with the Plateau Radio Television Corporation (PRTC) Jos, where he produced and presented a weekly Radio Programme called Plateau State Roundup between 1985 to June 1986.He started his working career in a publishing firm, Jator Publishing Company Ibadan, Oyo State as Deputy Editor/Administrative officer.He switched into Public Service, joining the National Productivity Centre (NPC) Abuja where he served as Productivity Officer, Senior Productivity Officer, Assistant Chief Public Relations Officer, and Chief Public Relations Officer between August 1998 to June 1999.
Mr Fasanya also served as Personal Assistant to Hon. Minister of State, Ministry of Defence between June 1999 to February 2002 and later Special Assistant to the Hon. Minister of Solid Minerals between February 2002 to May 2003.
Mr Fasanya was among those that formed the nucleus of pioneer staff of the Small and Medium Enterprises Development Agency of Nigeria (SMEDAN) in 2003 where he served as a Special Assistant to the Pioneer Director General/CEO of the Agency, Mrs Modupe Adelaja and was overseeing all units under the Director General’s Office as Deputy Director and Group Head, Corporate Affairs.
This dedicated and committed civil servant became the Acting Director General of SMEDAN between July to December 2008.
He was made the Group Head, Strategic Planning, Policy and Coordination between April 2009- January 2011. Mr Fasanya upon his promotion in January 2011 was appointed as Director, Strategic Planning Policy and Coordination, a position he held till October 2014 when he was promoted as Director, Enterprise Development and Promotion, unarguably the engine room of the Agency, a position he held till 2018 when he was appointed to another strategic position as Director, Policy Planning, Research Monitoring and Evaluation, a position he distinguished himself so well till his retirement from the civil service on 3rd June, 2022.
Mr Fasanya no doubt has seen it all in SMEDAN, an establishment whose concept and growth witnessed his inputs. It is therefore not a surprise that the Federal Government under the leadership of President Muhammadu Buhari found in him a good replacement for Dr. Dikko Umaru Radda who served the Agency for six years as DG/CEO.